It was a good car.

I’d been balking at the idea of trading it in and was contemplating getting it fixed, but the list of things needing repair kept getting longer and longer, so it boiled down to getting a loan to fix it up or bite the bullet and get a car payment. 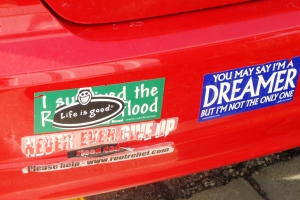 This car took me on a few road trips – to Chicago, Des Moines, Pierre SD, and many Minnesota adventures

When I bought this car, audiocassettes were the most common way to listen to audiobooks,
so I had to have a cassette player installed, as it only had CD!

In the glove box, I found the cassette that will play walkmans or iPods over the stereo. So retro!

When I bought this car, the moon roof scared me a little!
I was afraid a bird (more accurately, a wild turkey) would fly in or something.

So it wasn’t without a teary eye that I traded it in last week.
I told the guy “I needed a moment” with it and I took these photos.

It was a good car.

But it was time.

I spent more time researching things online than I did test-driving cars.

One car guy sent me an email saying that 4% of people spend more time looking for their car than their spouse.
That’s a weird statistic, isn’t it??  I didn’t spend THAT much time.  I was wanting it to happen sooner than later. 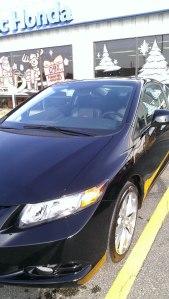 So this super-fancy car is a 6-speed manual! Yay!

Had to stop for the photo opportunity before I got to my house! Lovely digital interior after 44 miles!

So you’ll have to stop by and ask me for a ride!  I’m sure I’ll be ready to roll!
But I may make you notice that even my garage has the New Car Smell!

Merry Christmas to me!