Always so much to be thankful for!  We are marching in to June and the calendar is filled with fun things on the days that work isn’t scheduled (and even on some days when work is scheduled!).

Love this selfie with Rushford in the background! 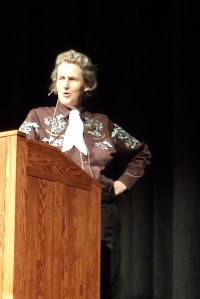 Love this kid who isn’t afraid of the saddle on his 15th birthday!

Love this guy and love hanging out with a 2 year old every now and then! It’s been a while…

As usual, I have much to look forward to, as well.  We are working fewer weekends than last summer, so I’m looking forward to that!  I am penciling in fun plans with friends and family – so give a shout if you want to get together!  Let’s make this the best summer ever!

If a June night could talk, it would probably boast it invented romance. ~Bern Williams

Below is a story that was written about Marissa and me after the flood.  College students were enlisted to interview people and to write the stories for a compilation, which I don’t believe has been published yet.  It’s hard to believe that it has been four years, as in some ways it seems like it was a LONG time ago.  Many things have changed…

Danette Grimsrud’s description of herself as “not an alarmist” is one that has come to define her during and in the aftermath of the August flood.  This denotes the primary difference between Danette and her teenage daughter, Marissa.  Danette said, “I was expecting the best and she was expecting the worse.”  This became especially apparent when Marissa lay awake that night thinking of all that would be lost while Danette realized she “had no control” over the situation and could do no more than was possible.  Even when Danette was leaving the house, one of her first thoughts after grabbing her purse and camera was to take a basket of clean towels to keep them dry once they reached the evacuation site.

Later, this failure to submit to alarm and a lack of understanding about what was actually happening caused Danette to feel guilty for leaving without attempting to see if neighbors needed to be warned.  In fact, Danette was surprised to have woken up to the warnings at all.  “I never wake up; I’m a sound sleeper,” Danette said.  But, because it was cool and Danette likes the sound of rain, she uncharacteristically slept with the windows open that night.  Marissa considers this a sort of miracle.

When Danette did wake up to sirens, like many, she thought perhaps they were to indicate a tornado warning.  Then, she heard of the flooding inStockton, but “that just seemed unrelated to Rushford,” Danette said.  After Danette’s mom called unsure of what was happening, Danette decided to go back to bed.  Danette’s mom called a second time when she heard the announced evacuation order.  At this point, Danette woke Marissa and Inna, their former foreign exchange student who had returned to work in Rushford for the summer.  The three were told to evacuate to the High School, but once they reached the bridge they were unable to cross because a tree had fallen on the bridge.  Danette said, from here they “could see water going through the houses on the other side of the bridge.”

They drove the backroads out of Brooklyn, past many cars lining the road leading out of town and admittingly driving over washouts, to north Highway 43. They stayed at Larry Dahl’s house, the father of Danette’s friend Deadra, for the rest of the night,  drifting between sleeping and watching TV, but were unable to get a weather report.  At about 6:30 a.m., they lost power.  “Then we grilled toast and made coffee on the grill,” Danette said.  Shortly thereafter, Danette’s mom called, saying, “Your house is under water.”

“I didn’t even want to go see it,” Danette said.  “We had three feet [of water] on our main floor.”  Since they were not allowed into town, they stayed at Danette’s parent’s house, which had power.  Marissa and Inna first went back to the house in a canoe on Sunday afternoon, but they couldn’t get the door open to get into the house. Then Danette’s dad and brother got in the canoe with them and the men went in and grabbed Danette’s contact stuff, make-up bag, the guitar, a laundry basket of dirty clothes that was floating, and anything else Marissa and Inna told them to grab! The men were wearing waders – the water was still thigh deep.   Danette and Marissa went back to their home after a few days, but were only allowed to stay for about 15 minutes.

When they were able to assess the damages, it became apparent that everything in the basement would have to be thrown because the walls had collapsed.  Only a plastic tub of Barbies and one of T-shirts was saved.  On the first floor, “anything above three feet,” pictures on walls, books and home movies on shelves, as well as most photo albums were saved from water damage.  In addition, the dining room table that Danette’s grandparents  received as a wedding gift and a cedar chest that her dad built for her graduation were saved.

Danette and her family took Marissa to college the following Saturday after the flood, and brought Inna to the Cities to fly back to the Ukraine on Sunday/Monday morning. Luckily she had grabbed her passport and things when they evacuated! What a hassle that would have added to the week!  But as a result, they were not in town when a lot of the cleaning was going on.

In fact, it was Labor Day weekend, “almost two weeks after the flood,” Danette said before the house was stabilized well enough to start their own cleaning – including digging out the basement and supporting the house. She was amazed at all the people who continued to come to help with the house.  Marissa especially appreciated the help, saying, “they just came in and got it done, whereas it was harder for us because we were attached to everything and already emotionally strained.”  Danette enjoyed the fact that “they just wanted to talk to us, too – to hear our story.  They wanted to know who they were helping.”

Danette decided to sell her Rushford home and is now settled inRochester.  Danette said if Marissa had been “10 or 15 life would have been different; but she’s 19 so I just could make different decisions.”  But it was still “a hard decision to make,” she said.  “It was hard to think about leaving.”  The flood was “like a kick in the butt to do something different,” Danette said.